Thanks for caring and sharing:)

I am SO incredibly excited to share this new recipe with you! I've finally found victory in the homemade deodorant laboratory (aka my kitchen) with my Homemade Magnesium Oil Deodorant.

If you've ever made homemade deodorant, you've probably found a few problems with many recipes. The ones I've tried were effective but either left a white residue that got on my clothes or was messy going on... some burned my pits and a plethora of other issues.

Why the heck would you want to make your own deodorant anyway, you may ask?

There are many hidden health hazards in traditional deodorants. If we continue to slather these potentially hazardous chemicals under our arms we increase our exposure to heavy metals (aluminum), parabens, pthalates, propylyne glycol and triclosan. These killer chemicals are related to cancers, alzheimers, endocrine system disruption, hormone imbalance, birth defects and organ toxicity. Maybe more that we're not yet aware of.

Natural News said that "Several studies have shown a link between increasing antiperspirant use and rising rates of female breast cancer and prostate cancer in men. However, the FDA has not committed to classifying it as a carcinogen. Their position remains one of "wait and see" as more definitive studies are released." I don't know about you but a "wait and see" attitude doesn't cut it for me.

Who the heck wants to wait around to see if these chemicals are going to cause cancer when the studies already show links?

All of this chemical soup is not worth the risk for me.

I'm not willing to stink though either, so that's how my quest began.

For awhile, I was resolved to just begrudgingly purchase the $9 a tube natural deodorants. "Pay it now or pay it later" has been my motto for years. Nine bucks for deodorant stinks all by itself though. That's when I started dabbling with recipes.

Need an extra perk? Magnesium applied to the skin absorbs better than most every other route

Nearly every person in the US is deficient in magnesium. It's considered the "invisible deficiency" because it's so easy to miss and doesn't show up in traditional blood work. It's a cellular deficiency. You can read more about magnesium deficiency symptoms HERE.

In the meantime, I'm loving that I have found such an effective deodorant base that's easy to make and costs me under a dollar to whip up a completed 4 oz. bottle!

Here you go. I hope you love it as much as I do!

1 cup *distilled water (distilled is important to not harbor bacteria)

Bring distilled water to a boil in stainless saucepan. Add magnesium flakes and stir/simmer until completely dissolved. Cool completely then add witch hazel and essential oils. Pour into glass spray bottle and ta-daa! Use a few spritzes for deodorant purposes. I use even more (10-20 sprays) each morning to boost my body's magnesium stores.

If you find that the magnesium solutions stings at all which is more likely after shaving, add a bit more witch hazel or a little fractionated coconut oil to adjust. 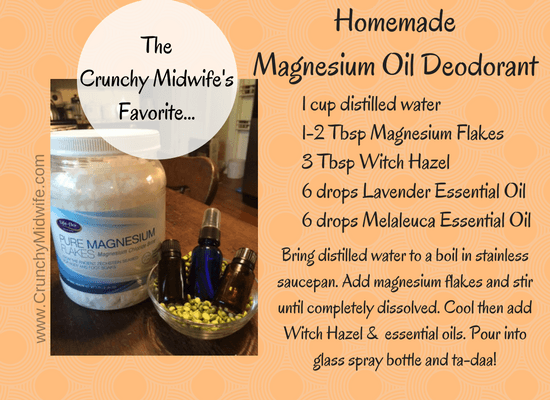 Lisa Byrd LM, CPM Lisa is a healthy mama/baby crusader and a "crunchy midwife" in Columbia, SC with a passion to help families create a safe, non-toxic home for their families. She's is a mom to 5 amazing adults and "Gigi" to 5 beautiful granddaughters and 1 incredible grandson. She lives and works in Columbia, SC where her home birth practice thrives. Lisa travels to Charleston, SC, Greenville, SC and Charlotte, NC to teach classes on reducing toxicity in the home. When she's not catching babies, creating clean, fun concoctions in her lab (ehem, kitchen) or teaching natural health care classes, you'll find her playing in her metal arts studio or soaking up negative, life giving ions at the beach. "We are all on a health journey. The key is keeping it simple and finding joy on your journey!"

Homebirth and Birth Centers in SC Under Attack Again

Essential Oils and Affirmations for Kids